An introduction to shoot-style wrestling in Japan (0/31)

An incomplete introduction to shoot-style in Japan
(this introduction dedicated to Maximumrocknroll film critic Carolyn Keddy.)


UWF is a professional wrestling promotion. It is not the 2006 promotion started by t-shirt entrepreneurs Earl and Dave Hebner because UWF stands for Universal Wrestling Federation.

Akira Maeda was a part of New Japan Pro Wrestling. As part of a storyline he began a promotion in 1984 that opposed his parent company's slide towards 'American' style. After the storyline ended Maeda decided to start the company for real. He did this with Satoru Sayama who was the original Tiger Mask.

The company was successful. Maeda and Sayama began to disagree about the underlying philosophy of the company. Both believed in a more realistic version of wrestling. This would come to be known as 'shoot-style'. Maeda wished to see more grappling. Sayama wished to see more strikes. Maeda beat Sayama up for real in a match using both grappling and strikes.

Sayama left the wrestling industry in 1986. He would found Shooto in the same year. Shooto is still in existence. Initially Shooto appeared very similar to kickboxing. Shooto would amalgamate with the sport of vale tudo in the 1990s. It is focused on real fighting and has a legitimate governing body. In many ways it is an unheralded pioneer. 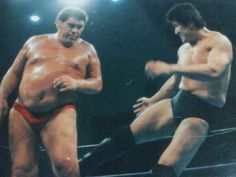 Maeda was fired by UWF and returned to New Japan. Maeda got into trouble repeatedly for unprofessional behaviour. The most famous example was a match in which he kicked Andre The Giant repeatedly for refusing to lose. New Japan would later fire Maeda for beating up Riki Choshu and refusing to travel to Mexico. Maeda would then restart UWF. UWF 2 or UWF Newborn ran from 1988 to 1990. This is the company that this blog will be focused on. The company was successful throughout its existence. The specific reasons that this version of UWF stopped are unclear. It is thought that competing egos among the top talents contributed. UWF would split into three separate companies.

i. UWF-I was owned by Nobuhiko Takada. UWF-I would close in 1996. Takada would then open PRIDE in 1997 with Nobuyuki Sakakibara. PRIDE contained nearly all real fights. Some UWF-I wrestlers did not want to do real fights so KINGDOM was formed in 1997. KINGDOM closed in 1998. PRIDE was very successful. PRIDE bought out by Ultimate Fighting Championship (UFC) in 2007. Sakakibara now runs RIZIN. Takada runs a dojo.

ii. PWFG was owned by Yoshiaki Fujiwara. It ran from 1991 to 1996. Two of its major stars were Masakatsu Funaki and Minoru Suzuki. Real fights appeared in 1992. These real fights inspired Funaki and Suzuki to leave in 1993 to found Pancrase. Everybody except Fujiwara would leave to form BattlARTS in 1996. Pancrase blurred the lines between real and fake at first. It was mostly real. The company still exists but is in different hands. Its impact is not as significant these days. BattlARTS had its most significant run from 1996 to 2001. It would run intermittently until 2011.

iii. RINGS was owned by Akira Maeda. RINGS ran from 1991 to 2002. It would return later in the decade as a martial arts company. This version of RINGS is less significant.

There is also a similar story on the women's side of wrestling in Japan. Ladies Legend Pro-Wrestling (LLPW) was a shoot-style informed defection from Japanese Women's Pro-Wrestling (JPW). LLPW chiefly ran from 1993 to 1998. It has returned for sporadic revivals since.

A splinter company from All Japan Women (AJW) was formed in 1997. It was called Arsion. Arsion talents trained at BattlARTS and attended their shows. Arsion ran until 2003.

Companies such as New Japan Pro Wrestling and Zero1 would incorporate shoot-style into their programming in the late 1990s and early 2000s. The style was not as accepted by the fans of those companies. With a few minor exceptions these companies do not use shoot-style wrestling in 2017.

The kickboxing promotion K1 began a sideline MMA promotion named K1 Romanex. It folded after one show. This show featured a lot of names from the shoot-style era.

Kiyoshi Tamura of RINGS would open the U-Style promotion in 2003. It ran worked-shoot contests until closing in 2008.

A revival of the earlier and less technically-accomplished shoot-style was attempted in 2004 by Big Mouth Loud (BML). BML could not compete and closed its doors in 2006.

Antonio Inoki founded the Inoki Genome Federation (IGF) in 2007. IGF has presented a mixture of shoot-style and real fights. IGF has a novelty value. Currently IGF is going through a series of splits that may be storylines.

Hard Hit is a shoot-style sub-promotion of Dramatic Dream Team that commenced in 2008. They have not run a show since 2015.


As the end of the excellent blog TK Scissors approaches, a "weblog" dedicated to detailing the style and substance of the RINGS promotion, it is clear that a number of compelling narratives and themes have emerged.

There's a profound leap toward capturing the cultural landscape at the point where the most 'real' forms of 'false' professional wrestling becomes actual fighting via a lengthy and enigmatic period of blurring the lines of each.

And this landscape is given colour and richness in its intricate detailing of how such illusions were maintained by the painting of the talents of its leader Akira Maeda as well as chief stylistic exponents Tsuyoshi Kohsaka, Kiyoshi Tamura, and Volk Han (and many more). It is well worth a read.

(This period's rush toward modern MMA was doubtless influenced by Pancrase, about which a new blog is set to emerge. Look in at @HybridShoot for more.)

Of course if we treat the history of shoot-style in Japan with more respect and parsing, it is evidently more complex and sprawling in a country deeply invested in combat sport activity.

But for the purposes of this blog and I guess the ease of not being thesis-deep in a sport we're supposed to just consume and move on from we accept the general narrative thusly: Karl Gotch came to Japan and impressed NJPW-head Antonio Inoki with the genius of catch-as-catch-can wrestling. Inoki, feeling that this style was the superior style of all the fighting styles, would book himself to defeat great exponents of other styles such as karate, boxing, judo, etc.

As this brand of entertaining nonsense was coming off its apex (Inoki vs. Ali) the 19-year old Akira Maeda entered the New Japan dojo. And as much as the young Maeda learned the intricacies of grappling from Inoki and his cadre of skilled trainers (Gotch, Sayama, Fujiwara, Allen Coage. Has a man been better educated?) one cannot help that Maeda learned a thing or two about the bigger picture along the way.

In this we can see the spirit-germ of the punkish ethos of shoot-style wrestling: that the enterprise has become too leaden with the proggish falseness of maintaining American-style drama (in a way that would also anticipate the Brechtian nightmare of post-kayfabe breaking and the admission that everything is fake so why not draw a firm line in the sand RIGHT NOW). There must be a new year zero.

In tackling this one key falsehood one must strip away all other elements of the grime and dust and bollocks and get back to presenting a pure vision: a vision of two competitors clanging away at each other using real techniques. And then, in developing this style, realising that some forms of what you perceive as realness are still fairly false. And also realising that some forms of falseness actually help the realness (as PRIDE would gloriously realise and UFC would dramatically overdo).

That Maeda was no older than 25 when the first UWF exploded is, to me, remarkable. I am resistant to great men narratives and find the 'brass ring' nonsense spurted by Vince McMahon to be ahistorical at best! But here is an example of someone just not doing something unless it is done his way and pish-posh to all else! So maybe there is hope for NXT up-and-comer The Velveteen Dream. If only someone could get this blog to him we might have the first excellent radical black wrestling promotion!


I digress. Whilst popular in New Japan prior to the first UWF, Maeda was not a superstar. His size and natural charisma opened doors that others would have had to train and job for years to get a sniff of. But attached to an ego the size of an Inoki, with an Inoki (and others) keeping him down, it seems only too expected that Maeda's career would be dictated nearly solely by Maeda's whims.

All of which might make you think that he is a classic asshole of wrestling, a Hulk Hogan-meets-Vince McMahon nightmare. But this story is not so simple. Perhaps because of Maeda's influential and singular path-clearing, and perhaps because Maeda was not simply some Hogan-style I-wins-lol type, and perhaps because ultimately there is the detectable trace of the nebbish who ultimately loses in the final analysis (unlike say Hogan in his Gawker case or McMahon and his ruining of all wrestling) there is a strange glow about a man who sometimes does incredibly awful things in pursuit of something arcane. Let me throw you over to TK Scissors, not for the last time I expect:

Our main event sees the always very good Andrei Kopilov against AKIRA MAEDA whose name came up in a recent Wrestling Observer Radio mailbag answer, in that a correspondent asked Dave Meltzer a question about Bam Bam Bigelow (who died penniless yet who asserted until the last that it didn't cost anything to watch the sunset; may peace be upon him) and the pleasingly aimless answer that then came eventually turned to Bigelow's time in Japan, and New Japan's decision to give him a win over Maeda, who uhhhhhhh was not wild about losing to a fat foreigner he would rather kick for real. As Meltzer tells it, Maeda agreed to do the honours (as one says) but was singularly unpleasant throughout. Bam Bam, when he got back from Japan, was talking to Dave about and was like yeah I don't know what was going on but at one point this Maeda guy just totally spat on me in the middle of the match, and then Dave explained about Akira Maeda, and Bam Bam was like oooooooh okay I see, Akira Maeda. Obviously this is the behaviour of a reprehensible asshole, but such is the strange yet undeniable lure of Akira Maeda that when I was listening to this story whilst tidying the basement (the basement that resists all tidying, that will be not be tamed) I didn't think "Maeda, you reprehensible asshole" but instead "lol Maeda you mad cunt" but in the English sense of cunt as term of fond warmth (I am not an objectionable person in any way and always use the word cunt sparingly and always responsibly and never unchivalrously, ask anyone).

If you remember (or scroll up to) the history lesson up top, the story of UWF is one of a newly-emerged and -grown section of the business in sudden fragmentation. We will learn all about the main actors behind the three-way split, as well as some other familiar (and one or two unfamiliar) faces along the way!

That leaves us here, with 18 of the 31 events promoted by the second - and in my opinion, best - version of the Universal Wrestling Federation (of Japan), on a hard drive on my computer. Even if the remaining 13 events make themselves known, I imagine covering all of them should not be too onerous a task. I am excited to learn and share with you!