Pre-note: As it stands on the date of writing (10/10/17) this represents the final UWF Newborn show that I have in complete and watchable form, so perhaps there will be an enforced hiatus until the world of the internet turns and deposits the missing 1989 and the entirety of the 1990 shows somewhere accessible. 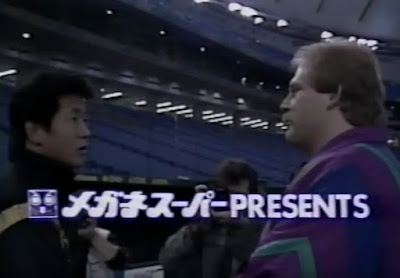 As we learn from watching RINGS (or if you are me, reading RINGSblog aka TK Scissors) Akira Maeda's obsessions in the years between UWF's death and RINGS' creation would morph from "shoot-style" wrestling in Japan to a nascent-MMA/NHB style incorporating fighters from around the world. We have seen the beginnings of that in UWF, sure, with the appearances of a sextet of shoot-boxers, Gerard Gordeau, Bart Vale, Trevor "Power" Clarke, Chris Dolman, etc.


To go 'inside the curtain' (which is the meaning of the top division in sumo known as Makuuchi (幕内), referring to the roped-off area these champion athletes would wait in prior to performance, I believe 'curtain' is 'maku' as the third tier is 'makushita', meaning 'beneath the curtain'. Watch sumo, it is excellent) momentarily this is the show that I had feared watching the most ahead of time for reasons that will become, hopefully, apparent during the writing of this entry. 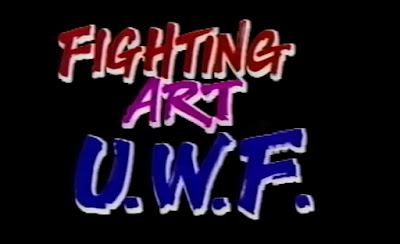 And to go even further inside that curtain like, perhaps, ha ha (does knowing cultural studies lecturer positional adjustment) the recent season of Twin Peaks (imo serious ten out of ten bestoftelly thanks) this entry reverts to the initial style of watching the show and sort-of remembering it which is sometimes stylistically more satisfying but perhaps less involved and perhaps emotionally and factually false. We shall see, won't we? (EDIT: I wrote this intro way before I watched it and eventually I managed to get to a point where I could live-type the edition, rendering this paragraph mostly redundant except aesthetically which is to say not redundant at all)
Read more »
Posted by D. Thomas at 14:07 2 comments: